Create custom user roles that accurately reflect your organization's team structure, ensuring the appropriate site users have access to each section within the Recurly App necessary to support their role function.

To create a new role, go to the “Roles” page, and press the “Create Role” button on the top-right of the screen.

The “Role Name” field is required. There is also a requirement to select at least one permission within the role in order to successfully create or save a role. 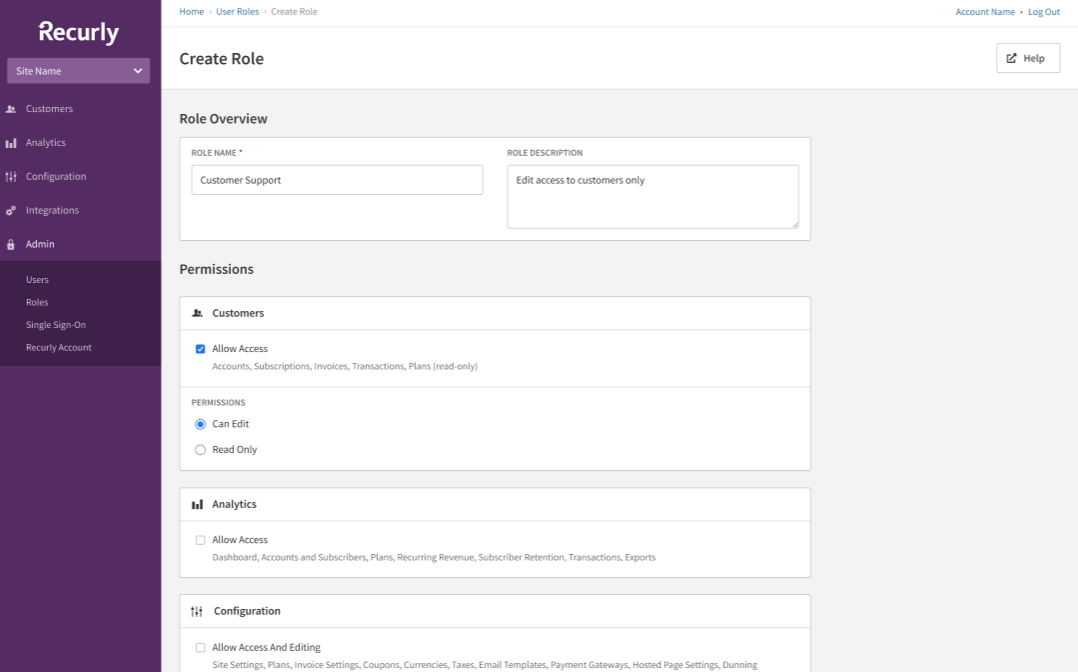 The Site Admin role should be assigned to user(s) within your Recurly site that require full-access all permissions across the Recurly App. There must always be at least one Site Admin user assigned on every Recurly production site. This role cannot be deleted or edited, except for the role description. 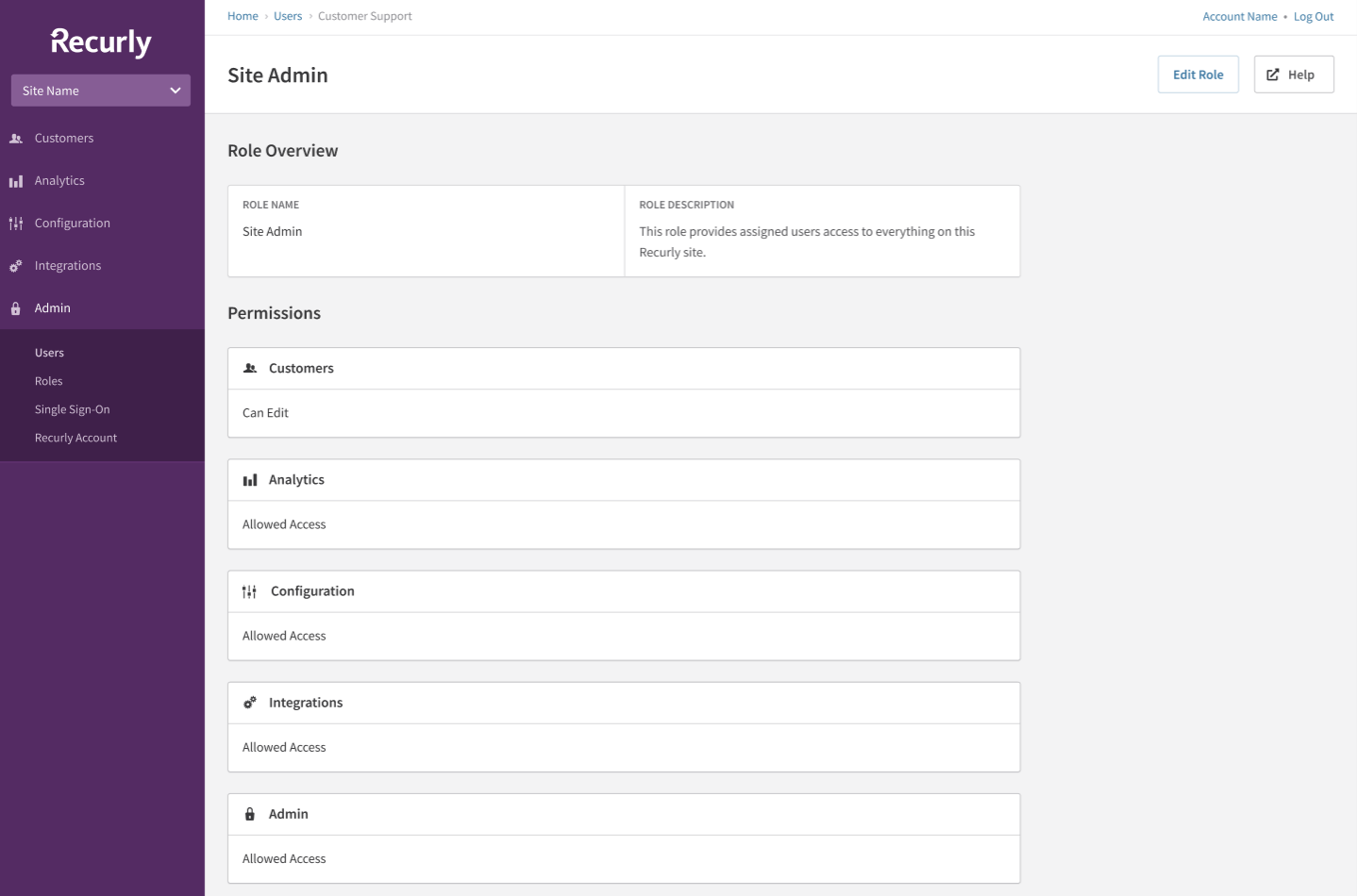 You can delete a role in two places.
From the Roles list page, hover over the ellipses to choose whether to edit or delete a role.
From a role’s read-view page, click the “Delete Role” button at the top-right of the screen.
If there are any site users assigned to the role you are wishing to delete, you will be prompted with a pop-up prompt that will allow you to reassign those site users to an alternative role prior to deletion of the role you are attempting to delete.
You can use this opportunity to create a new role if none of your existing role options fit the set of users you need to reassign.
After successfully deleting a role, that role will be removed from the Role list page and the site users previously assigned to that role will now have the permissions set under their newly designated role.

For merchants who were live in production prior to migrating to the roles-based user management system: a set of “out-of-the-box” roles has been provided in order to ensure a seamless transition into the new roles system.

All possible unique combinations of permission sets that were assigned to individual site users before the migration were recreated as out-of-the-box roles to reflect the permission combinations that were unique to each site’s users.

Therefore, all production sites will be provided with a set of out-of-the-box roles that will match the permission sets that were assigned to their site users prior to this migration.

Merchants may create their own unique custom roles to assign to any site users. They may rename or delete the provided roles if they so choose, with one exception: the “Site Admin” role, which requires at least one site user be assigned at any given time. Recurly will create the Site Admin role for all sites. 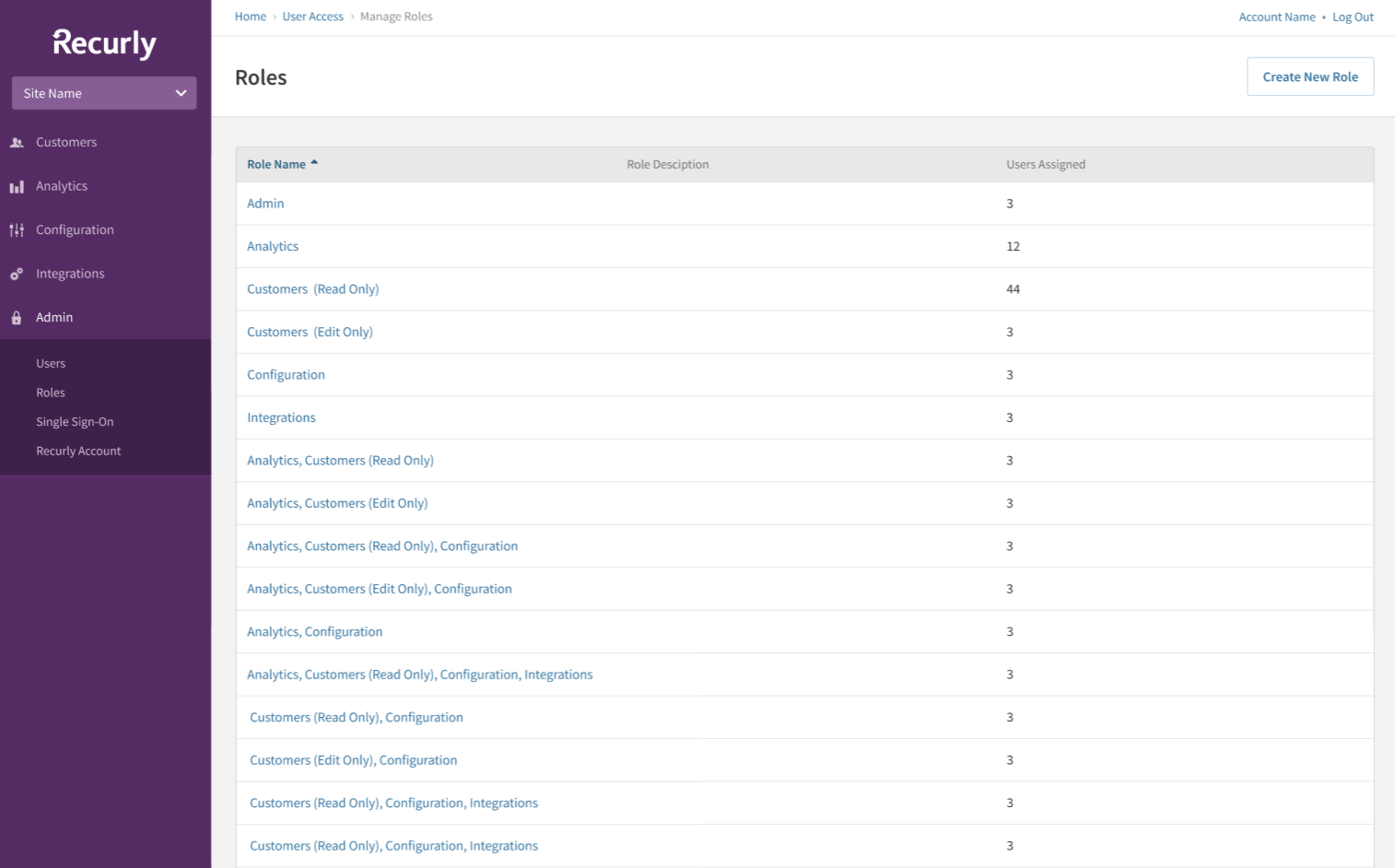 Recurly segments the Recurly admin console into different areas of access for maximum user control. You can create a role with one or more of the below sets of permissions for the appropriate site access. Users will not be able to see or access navigation menu items or pages they do not have access to via their assigned role.

There are two options for providing access to this section of the application:

User has access to view and export all data under the Analytics navigation section.

User has Read-Only or Admin access to Recurly’s Revenue Recognition platform. The “Allow Access” checkmark to enable/disable general access to Recurly rev-rec in a role will always be present and editable, however, the ability to set whether a role has “Read-Only” or “Admin” access within the rev-rec platform will only be available at the initial time of configuring the role. After the role has been configured and saved, granular rev-rec access is only configurable directly within the Recurly Revenue Recognition platform itself.

User has access to view and edit Webhooks, API keys, and Recurly Integrations to QuickBooks, Xero, and Mailchimp.